So I've been keeping tabs on the latest set of corps members - they've just arrived to their Orientation camps and the stories and terror some of them are having are simply hilarious! My friend posted a picture of her room in despair, and I told her to remember that I was in a corridor-converted-into-a-room, so she should count herself lucky for having space. 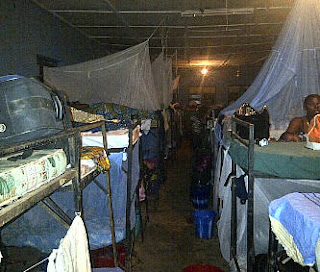 Her next status was that there were 2 babies in the room... I'm sorry, WHA? QUE? She's joking, right? Apparently another lady in her camp came with a 12-day old baby! However, she was yelled at and sent back home by NYSC officials.

Well, 10 minutes later, another friend posted the following picture of a baby in an orientation camp somewhere... 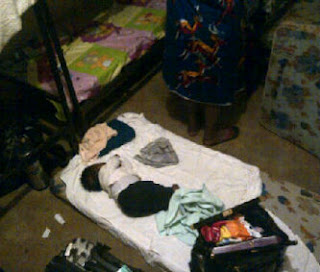 I have to ask now why a woman would bring a child to the orientation camp. Concerning babies in camp though, NYSC states on their website:

•  Will Pregnant Women and nursing Mothers be registered in the Orientation Camp?
No. There will be strenuous exercises in the Camp which may jeopadise the health of the mother
and the unborn child. In the same vein, babies are not allowed in the Camp,
so nursing mothers will also not be registered

It always broke my heart to see women with infants and young children go through the stress of coming to our local government office or CD and have to fight their way through the lines to get their cards signed. At least in my local government, my LGI always made it a point to make sure that pregnant women or women with children got first priority.

How can NYSC serve these women better, I ask? Like I said, during the registration process, I believe they should be given priority and preference to stay in their states of residence. That would be a good first step. This should be noted on their registration form, so that while call up letters are sent out, they are automatically waived from attending camp - but given the necessary instructions on getting paid allowance, signing the 'Book of Life' (this book that has every corps members' contact information), etc.

Check out my other blog Berry Dakara